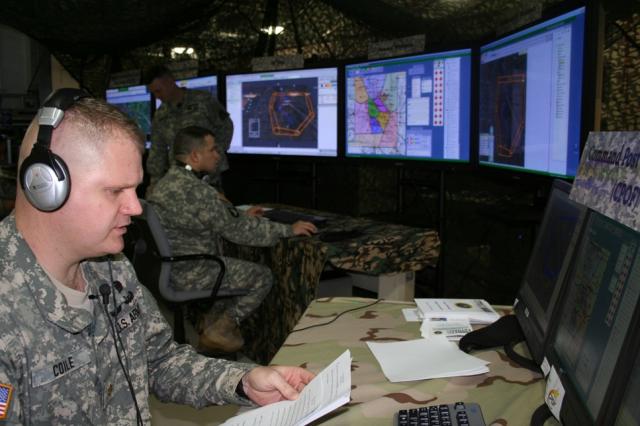 The U.S. Army has long implored acquisition personnel to involve users early and often in the process. An annual event held by two Army organizations has been successful in bringing technology developers and the potential users together to exchange ideas.

The Army Mission Command Battle Lab (MCBL) and the Army Com- mand and General Staff College (CGSC), both in Ft. Leavenworth, Kan., created the Science & Technology Seminar-Brownbag Lunch Program in 2010 to expose CGSC students, faculty, and staff to mission com- mand-related R&D systems and products, while giving developers feedback on their work. The 2-day seminars includes static displays and demonstrations on day one and a formal brown-bag lunch session and demonstration on day two. The schedule is closely coordinated with the CGSC leadership to ensure student availability and maximum participation. Additionally, the MCBL makes every attempt to synchronize the products being demonstrated with the CGSC course of instruction (e.g., handheld technologies are dem- onstrated during brigade operations). The event is a venue in which developers from across the Army’s R&D commu- nity receive feedback from experienced leaders and from the many multinational and sister-Service personnel attending the CGSC. Conversely, the students who participate in the semi- nars expand their experience base and are better prepared when the new technologies arrive in the field.

The MCBL, with support from the CGSC, executes two to three seminars each year, soliciting operational feedback from CGSC faculty, students, and staff. The CGSC provides intermediate level education (ILE) for Army and sister-Service officers, in- teragency representatives, and international military officers. The ILE course of instruction is a 10-month, graduate-level program; the curriculum includes instruction on leadership philosophy, military history, and the military planning and de- cision-making processes. There are two ILE classes per year; the first begins in August and ends in June, and the second begins in March and ends in December.

With the exception of two 2-month periods, there are at any time approximately 1,400 CGSC students (Army, sister- Service, and international) completing the CGSC instruction. Given the current operational environment, the average CGSC Army major has deployed three times to a combat zone. A more experienced and expansive population does not exist anywhere else in the Army. This and the genuine need for broad operational input to S&T development work were the key drivers to the program.

The MCBL sponsors and is involved in a number of S&T development efforts. With the large number of S&T projects across the government, academia, and industry, it is possible for the MCBL to target and sponsor the MC technologies with the greatest potential to fill the key capabilities gaps and technology shortfalls identified by evolving documents, such as the Mission Command Capabilities Based Assessment (CBA), Program Executive Officer Technology Transition (T2) Matrices and other Joint Capabilities Integrated Development System (JCIDS) documents, such as the Net-enabled MC Initial Capabilities Document (Net-enabled MC ICD). All these documents describe capability gaps, while the Net-enabled MC ICD and the Mission Command Essential Capabilities (MCEC) Document highlight the most critical ones. In an average year, the MCBL participates in approximately seven S&T projects. In most, the MCBL provides comprehensive operational input and oversight.

One of the most technically diverse seminars was in March 2011. It highlighted technologies under development by the Defense Advanced Research Projects Agency (DARPA) and the Army Research, Development and Engineering Command (RDECOM). RDECOM developed a prototype handheld application and demonstrated just a hint of the power of augmented reality (AR). In this tool, the RDECOM developers leveraged the highly successful tactical ground reporting (TiGR) system database, rendering symbols and key operational information on a handheld (Android) device. The CGSC officers could see a display of notional TiGR events (e.g., IEDs, targets, and key terrain) close to their location, overlaid on the screen and indicating general information and geo-location of the events.

The application leveraged the internal capabilities of the handheld device, including the forward-looking camera and the global positioning system (GPS). In operation, the AR screen simply looked like a window highlighting whatever was in the field of view of the camera (where the device was pointing) and those TiGR events within a specified range of the application. During the demonstration, CGSC officers were allowed to use the handheld device and offer their thoughts. Even though this research was immature, it exposed Army officers to one possibility for enhanced and timely situational awareness at the lowest tactical levels.

“We work hard to engage soldiers on our R&D efforts at every opportunity, but receiving input and feedback from experienced Army officers can be challenging for us,” said Cyndi Carpenter, the COBRA ATO manager for CERDEC’s Command, Power and Integration Directorate. “The relationship the MCBL has built with the CGSC and initiating the S&T Brownbag Lunch program is certainly a great use of the wealth of operational expertise on Fort Leavenworth. Our programs are, and will continue to be, better for it.”

A second technology demonstrated at the March 2011 event focused on a two-way, speech-to-speech translation system called TRANSTAC. It had the capability to translate Pashto, Dari, and Iraqi Arabic to English and vice versa. The TRANSTAC device was developed in response to a need from Army units. Soldiers at checkpoints and out on patrols required the ability to better communicate with the local population. TRANSTAC offers a unique capability to quickly break down the language barrier. Soldiers can speak into the device in English and within a few seconds, both oral and written Pashto, Dari or Iraqi Arabic is relayed to the recipient. It can also do the same translation from verbal input from any of the three languages and provide audible and written translation in English.

TRANSTAC worked very well; at one point, an Afghani CGSC student did an impromptu demonstration of its ability to translate Pashto to English. The demonstration highlighted potential techniques and word usage requirements in situations where warfighters encounter individuals using different dialects, as well as the need for being prepared if the translation is incorrect.

The participants were particularly interested in the TRANSTAC product, and the CGSC officers were able to see firsthand an S&T product already being used in theater. At the time of the demonstration, DARPA and the Army had fielded 102 of the TRANSTAC devices to a brigade combat team deployed to Afghanistan. TRANSTAC received a great deal of positive feedback during the seminar. In fact, it subsequently received approval as a System Under Evaluation (SUE) at Network Integration Event (NIE) 12.1 and received an evaluation of “field and continue to develop” by the Brigade Modernization Command (BMC) and Department of the Army. Brig. Gen. Randal A. Dragon, commander of the BMC, wrote of the TRANSTAC system: “Machine Foreign Language Translation (MFLT) communicated successfully in foreign languages and was easy to install and use.” TRANSTAC is scheduled to transition to the Machine Foreign Language Translation System (MFLTS) program of record. The demonstration helped highlight TRANSTAC’s functionality for CGSC officers, it also facilitated feed- back and identified areas where additional refinement could enhance the tool.

In the most recent lunch event, the MCBL coordinated with the Program Manager Mission Command (PM MC) to introduce its concept for reducing the numbers of MC systems and providing MC capabilities to disadvantaged users—the personnel on a staff who are not fielded to an MC system. Called Command Web, it is a key element of the MC convergence strategy for a consolidated web-based environment. Command Web is essentially a framework for housing light-weight web applications called “widgets” that use the Ozone Widget Framework (OWF) environment. A primary benefit is that it allows third-party widget developers to build widgets for a wide spectrum of users and functions—all interoperable. Most importantly, this product complements the Command

Post of the Future (CPOF) by extending CPOF–like capabilities to disadvantaged users through the maneuver widget. It will help to ensure critical situational awareness information is shared with all members of the operational team, including members outside the Army.

During the seminar, the PM MC developers received valuable feedback from more than 50 personnel. Discussions and feedback from experienced soldiers centered on key functionality within the widgets, interface designs, applicability across different computing environments (e.g., command post), and general employment in an operational environment. Given that Command Web was still in development, this feedback was extremely valuable, helping to ensure the fielded product better meets the soldiers’ needs.

With the continual evolution of military operations and an ever-changing technical environment, the importance and value of bringing experienced users in early and often in a product’s development cannot be overemphasized. The MCBL recognizes and embraces this mandate, reaching out to the largest population of experience soldiers in the Army Command and General Staff College. Through the seminar program, the MCBL is able to solicit input from CGSC students and staff in a non-threatening, volunteer environment, where both the materiel developer/S&T organization and the CGSC student can benefit. The three S&T Seminars/Brownbag Lunch sessions in less than 2 years have demonstrated the value of the program, with hundreds of CGSC officers and staff participating and six significant S&T programs gleaning valuable input for their development efforts. With support from the CGSC, the MCBL will continue to execute this unique program, which serves as a conduit between the S&T materiel developers and the unequaled experience-base at the CGSC. The long-term impacts of this effort are many—from improved products and functionality to reduced life cycle costs.

The authors can be reached at jeffrey.from@us.army.mil and brett. burland@us.army.mil.