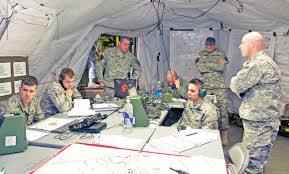 A premise of the battle lab study was that brigade commanders have access to the right types of information to maintain Situational Awareness (SA) while in the command post (CP). However, this limits the commander’s ability to provide Mission Command from the front in complex environments. The battle lab study confirmed this premise and identified a need to provide commanders a capability that provides access to information while leading from the front.

The introduction of digital mission command systems and supporting networks has made the CP the center of a commander’s universe in Unified Land Operations. Due to this concentration of critical information, many commanders find themselves feeling the need to stay in their CP just a little longer to maintain a higher level of SA. The findings from a current Army Expeditionary Warrior Experiment found that 13 out of 13 missions during the exercise mentioned that the Exercise Force commander remained tethered to technologies in his vehicle or his base defense operation center, rather than moving to the front lines.

Do information systems in today’s command posts perpetuate the need for commanders to stay in the CP to maintain situational awareness? During World War I, the generals that led from the CP were called the “Chateau Generals.” During Vietnam, they were sometimes referred to as “The Perfume Princes.” Are the digital mission command systems and supporting networks creating our next generation of “Chateau Generals or Perfume Princes”? Will our modern day commanders stay tied to their CP because they have access to all the information and answers at their fingertips and the ability to command assets with the move of an icon on a virtual map screen with a single click? Will our modern day commanders be termed the “Great Wizards”?

Much work has been done on the development of Mission Command systems and understanding the critical information needed to ensure mission success from both materiel-driven and human-centered perspectives. However, there remains little understanding of how to tailor this information to facilitate unit performance from the commander’s perspective.

Currently there are several ongoing projects for Mission Command platforms within the Army. A good example is “Mission Command on the Move.” This project allows the commander and selected members of his or her staff to maintain SA by placing them at the most critical points on the battlefield, while still leveraging all of the same mission command capabilities left behind at their CP. However, sooner or later, the commander will have to move from their new CP to the front lines. What happens to the commanders’ SA once they walk away? How does the commander keep SA throughout the battle?

Developing a commander’s-only system would enhance and maintain the commander’s situational awareness while providing capabilities that support their ability to lead in complex environments. A commander’s only system would address the Army Campaign Plan objective to “equip the Army for 21st century operations” with emphasis on the “leader development” research priority and could be critical to the Army’s future success.

Many commanders expressed the need to make decisions in a timely manner. These decisions require certain critical pieces of information, often spread across systems, and are not available at the critical time or format needed. This creates an additional burden on the commander in terms of information search, retrieval, organization, visualization and analysis, and may slow down the decision cycle.

The analysis of the interview data provided a set of findings organized around five commander-centric themes.

Commanders identified 25 systems they relied on to provide operational information for mission command. These systems are principally operated by their staff in executing the operations process. The following systems were the most frequently mentioned:

Many commanders expressed frustration with the variety and complexity of systems fielded and the lack of horizontal and vertical integration across fielded systems.

Commanders rely on these systems to provide critical information necessary to make decisions in a timely manner. The lack of data integration and knowledge management in today’s mission command systems results in a cognitive burden on the commander and their staff while searching and retrieving information, slowing down the Military Decision Making Process. Commanders emphasized that they and their staff are often bombarded with data and feel overloaded at times. They realized that systems can provide a lot of information that can draw attention away from what is most important. They also stated that system updates and patches were difficult to perform and often caused interoperability problems. The lack of integration across systems is likely one of the most significant factors in increasing the commanders’ cognitive burden.

Commanders expressed a need to visualize friendly and enemy pictures. These pictures included detailed information of positions and strength down to the individual soldier, an indicator of information age or latency, summaries of friendly logistical/sustainment capabilities, degree of network latency, and detailed enemy information such as artillery capabilities and the projected enemy awareness of the friendly force. Availability of Unmanned Aerial Sensors, and other Intelligence, Surveillance, and Reconnaissance (ISR) system information was also mentioned.

The majority of commanders stated they were “visual learners,” and preferred graphical information. Some commanders expressed a desire for digital 2D and 3D maps that could be easily scaled with standard military map symbology, labels, and overlays that scale with the map. Commanders also desired the ability to annotate and create layers on maps. 3D maps were highlighted as key for mission planning and visualization of the impacts of terrain features on the operation.

Most commanders leaned towards the Military Decision Making Process (MDMP) supported by the Decision Support Matrix in their planning. One commander used systems theory, recognition primed decision making and center of gravity analysis to support different situations and different needs of subordinate commanders and staff. He expressed the desire for a decision support system that was flexible enough to employ all of these decision-making frameworks. Another commander felt that some of his decisions could be automated and that technology could enable development and dissemination of commander’s intent and guidance.

Most commanders stated they needed to command their forces from anywhere on the battlefield. They must be untethered from the command post while maintaining connectivity with key leaders and unified action partners. Some commanders identified a critical need to use mobile devices to allow them to receive and push information in real time from any location to the CP. Information is currently distributed through written messages, voice messages, and photographs. These capabilities are required at all times to allow the commander to provide direction and execute mission command from the point of decision. Mobile device and network security issues must be overcome in order to deliver this desired capability, essentially providing the commander with access to CP resources in a set of mobile apps.

Commanders also discussed the training benefits that mobile devices offer. Soldiers can read articles, technical manuals, or course materials in their free time by accessing them with their mobile devices no matter where they are. A field artillery officer talked about a training application for tablet computers that helped his soldiers maintain proficiency in maintenance tasks because they could practice the task simulator on a tablet using touch inputs.

Many commanders expressed a strong preference for face-to-face interactions with their staff and subordinate commanders when possible. This type of engagement is key for building trust and developing a shared contextual understanding of the situation and mission. Commanders described the need to read nonverbal behaviors and cues from face-to-face meetings that were not available in voice communications, emails or text chats. A key point that several commanders expressed is a desire to have a video chat functionality in situations where face-to-face meetings were not possible in order to better read non-verbal cues. In contrast, some commanders observed that younger soldiers are more comfortable with text and email communications and may prefer to interact in that manner.

There was a desire for tools that are intuitive and easy to use – systems and applications they can “just pick up and use” without extensive training. The majority of commanders mentioned Apple and Google products as exemplars and told stories of their children who are able to use these devices without instruction. Commanders desired systems that are easy to learn and that are more consistent with their day-to-day experiences. Designers should assume that commanders and their staff will have minimal experience using their systems when first deployed and the pool of “expert” users will be limited. 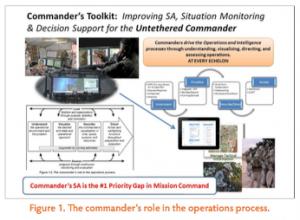 The ability to write and edit in a digital medium to better convey their intent and ideas was highly desired by commanders. This included the ability to share annotations and sketches with others, drag and drop elements on a display, and auto-populate entries when filling out forms.

Several commanders stressed the need to reduce the amount of equipment and gear that he or she has to carry. Each piece of equipment adds complexity and creates a segregated command environment.

The capabilities described by the commanders in the themes above have been provided
by mission command systems in one way or another since the 1980s. However, what is revolutionary about their information and system requirements is the break from monolithic mission command systems to provide a synthesized set of capabilities in a mobile device that enables the commander to be on the move while maintaining situational awareness away from their command post.

Current Mission Command systems are used by the staff in the command post to execute the operations process, integrate growing amounts of information, and support decisions in Unified Land Operations. The forward presence of the commander on the battlefield remains critical for ensuring mutual trust between commanders and their troops in executing mission command. While digital technologies today enable commanders to attain unprecedented levels of SA, nothing substitutes for the physical and moral presence of the commander on the battlefield.

For effective 21st century operations, available information and collaboration capabilities must be harnessed to equip commanders with the right tools to enable effective situation awareness, and support their requirements to communicate with subordinate commanders.

Introducing digital mission command systems and supporting networks will continue to make the Command Post the center of a commander’s universe Unified Land Operations (ULO). Despite this current concentration of critical information in the CP, commanders should not have to decide between staying in their CP, or moving to the front lines.

Developing a commander’s-only system would enhance and maintain the commander’s SA while providing capabilities that support their ability to lead in complex environments.

So instead of becoming the next generation of “Chateau Generals or Perfume Princes,” could it be possible that our modern day commanders possessing a commander’s-only system could always be found where they belong: on the front lines with their soldiers, while still possessing SA powers capable of having all needed information and answers at their fingertips!