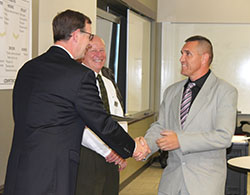 Students at the U.S. Army Command and General Staff College at Fort Leavenworth, Kan., now have an opportunity to take a leadership course and earn academic credits from Northwest Missouri State University through a recent contract award.

Northwest, in partnership with Apex Analytics Group Inc. and System Studies and Simulation Inc. (S3), is developing and implementing a strategic leadership seminar for the U.S. Army Command and General Staff College, School for Command Prep (SCP). The seminar will be taught in a five-day, 40-hour setting, as a part of the college’s Brigade Pre Command/Command Sergeants Major Course. Additionally, the instruction will include four Continuing Education for Senior Leaders (CESL) seminars for Army civilian leaders preparing for senior executive service. Combined, the seminars will be taught 14 times per year at Fort Leavenworth with an additional seminar taught in the Washington, D.C., area.

The first seminar was successfully conducted Aug. 11-15, and will serve as many as 672 students during the 2014-2015 academic year. The contract also includes two optional one-year extensions through June 2017.

“We are pleased to be able to provide graduate credit to this seminar class through this partnership,” said Dr. Greg Haddock, Northwest’s vice provost and dean of the Graduate School. “This is another wonderful opportunity for command team members to gain key leadership knowledge that merges current business practices in change management, team development and strategic direction in an environment of challenge, change and growth.”

Eligible students who complete the course will receive two hours of graduate credit at Northwest. Additionally, those students will have an option to take a “+1” hour of graduate credit through Northwest, creating a 3-hour course that fulfills elective requirements for Northwest’s Master of Business Administration program or another graduate degree. The +1 course will be developed by Northwest faculty and offered once per trimester. Students taking the additional course will be charged the Northwest graduate tuition rate, and eligible students may use their GI Bill benefits.

Apex and S3 will employ instructors, who will be approved as adjunct instructors of Northwest through the University’s Graduate Council process. Northwest instructors will also serve on the instruction team, adding a solid academic and business flavor to the seminar. Northwest, Apex and S3 are developing and evolving the course content and syllabus jointly.

“Our successful contract award was only possible through a great team, willing to work hard and come up with unique and new methods to execute the seminars,” said Jeffrey From, managing partner of Apex Analytics Group. “Our performance on this contract comes with enormous responsibility. Every student in the program will ultimately serve as a senior military or civilian leader in the Army, with a future Army chief of staff or secretary of the Army included among the graduates.”

Apex is a prime contractor for the U.S. Army on multiple contracts related to systems development, experimentation, research and development and training-related programs. For this project, Apex is the prime contractor, with Northwest and S3 serving as subcontractors.

Northwest submitted a response to an early sources sought solicitation indicating its interest in becoming a vendor to the U.S. Army and providing the leadership seminars. In May, Northwest began working with Apex to develop a proposal to provide a series of strategic leadership seminars, and a contract was awarded July 31 to Apex and the University.

U.S. Army Command and General Staff College at Fort Leavenworth is a graduate school for Army and sister service officers, interagency representatives and international military officers. Established in 1881, the college serves students and has satellite campuses at Fort Belvoir and Fort Lee in Virginia, Fort Gordon, Ga., and Redstone Arsenal, Ala.

Northwest is a coeducational, primarily residential four-year university offering undergraduate and graduate programs. Founded in 1905, the University has evolved into a vibrant and diverse learning community with an enrollment of more than 6,500 students hailing from throughout the United States and 32 countries. The university offers more than 150 student organizations, and textbooks and a laptop are included in tuition. Northwest also boasts a 59.2 percent graduation rate, which is significantly higher than the national average. Also, 97.5 percent of Northwest bachelor’s degree earners and 99 percent of master’s degree earners secure employment or continue their education within six months of graduation, according to the most recent data.

Northwest has enjoyed other partnerships with the U.S. Army Command and General Staff College, Fort Leavenworth and the U.S. Army’s Communications-Electronics Research Development and Engineering Center (CERDEC) in recent years. Northwest recently renewed an agreement to continue its work with CERDEC and the Army’s Mission Command Battle Lab at Fort Leavenworth on the development of new mission command applications for Army commanders. Last spring, Northwest also hosted Brig. Gen. Christopher Hughes, deputy commanding general at the U.S. Army Command and General Staff College, and other servicemen for a leadership symposium.